There is no better way to generate buzz in the commercial airline space than to promise a better inflight experience to economy class travelers on long-haul flights. Perhaps that is part of the motivation for an announcement from Airbus and Zodiac Aerospace at the 2018 iteration of Aircraft Interiors Expo in Hamburg, Germany. The two are teaming up on a “Lower Deck Modules” (LDM) project in hopes of transforming cargo space into passenger space. The renderings promise a bar, meeting rooms, movie screening room, kids play area, and – most importantly – bunk beds. Yup, bunk beds for economy class travelers on ultra long haul (ULH) flights. The two vendors believe it is possible, but will it ever fly?

Most objections to the concept so far focused on the regulatory challenges around such an offering. If passengers are in those areas during critical phases of flight then they must be able to evacuate from them. That would mean new emergency exits on the lower deck and that’s just not happening. The good news is that the LDM project is planning on only making those areas available during the flight, significantly reducing such challenges. With that change there is precedent for making it fly. A generation ago lower deck lounges on the L-1011 were a great selling point for airlines. Today there are lower deck lavatories on the A330 (Thomas Cook) and A340 (Lufthansa) serving as reference points for some of the emergency fittings that the LDM pods would need. Oxygen masks would be required and can be integrated into the construction, for example. Ditto for seat belts or similar restraints. But a full egress scenario from the lower deck should not be required.

The announcement with Zodiac Aerospace is not the first time Airbus has worked on modular cabin offerings. The Airbus Silicon Valley office A³ funded a project called Transpose, with a “mission to rethink the industry’s approach to aircraft cabin design.” The approach Transpose chose? Modular bins featuring different amenities including playrooms, workspaces, cafes and beds. It is nearly identical to the LDM project proposal, though Transpose focused on the main cabin deck, not the lower level. That project terminated just a month ago, with the associated IP transferred to the core Airbus operations. The group considered Transpose a success:

The project demonstrated a real market case for evolving commercial aircraft into flexible platforms that can unlock new revenue opportunities for airframers, operators and the surrounding ecosystem. Transpose’s work will enable Airbus and the industry at large to continue providing new options for airliners — ultimately building the future of flight.

Based on media coverage Transpose certainly delivered success on shifting the conversation to what could be on aircraft, though the group never really got into what is practical. And that’s where things start to get dicey.

The biggest challenge for the LDM project is not certification; as noted above there is a precedent and road map to work from. But the lower level mod on those lavatory projects is a semi-permanent installation. On the LDM project the bins are supposed to remain modular and portable, to be more easily swapped (i.e. hours, not days) should the airline so choose. That creates a sizing problem.

The Airbus twin-aisle aircraft use LD6 containers as the full-width cargo unit. The dimensions of those containers present challenges for this plan. 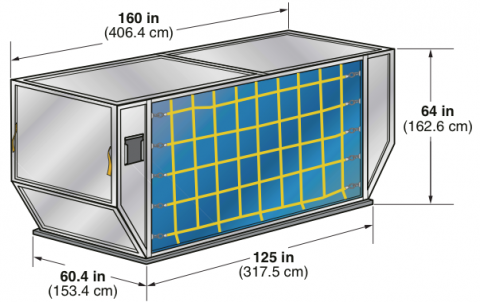 The 160″ upper width dimension is more than sufficient for the planned bunks, but the Airbus/Zodiac Aerospace renderings also show bunks along the short side. That would bring a 60.4″ maximum bed length before the fixtures are installed. That is pretty short, even for an economy class option. Even if passengers are willing to accept that short bed length the head clearance remains a challenge. The containers are only 64 inches (1.6m) tall. And, again, that’s before fixtures are installed. With such a limited height it seems that getting people into the space or moving around comfortably is unlikely. Sure, passengers can crouch down for a few minutes as a compromise to access the bunks, but there are some safety concerns that come with such a layout; those may be harder to escape than oxygen masks or such.

Show me the (belly) money!

While the selling point of the project is passenger comfort there is also a significant financial motivation for the airlines. The LDM pods would fly where cargo used to be carried in the aircraft belly. Yes, cargo demand continues to increase in most regions but so do the dedicated cargo operations. That leaves commercial carriers looking for options to better monetize the belly space on some routes. There are other routes, particularly in the ULH category, that are restricted from carrying a full cargo load because of aircraft range limits. Presumably the LDM modules will be lighter than a full cargo container, striking a good revenue and performance balance for such trips.

The service would likely require a crew member to be involved in coordinating access and managing time slots for the bunks. That increases costs for the airline and on longer flights the crew costs are not insignificant. Still, the theoretical revenue should more than offset that, assuming it ever takes flight.

Will it ever fly??

As with many concepts unveiled at AIX there is a high probability this solution will never take flight. And that is completely okay. It takes pushing the limits and stretching the imagination for the real improvements to actually materialize. Maybe it won’t be bunk beds but another concept that builds on this one the way LDM built on Transpose. Ultimately that’s good news for all parties.